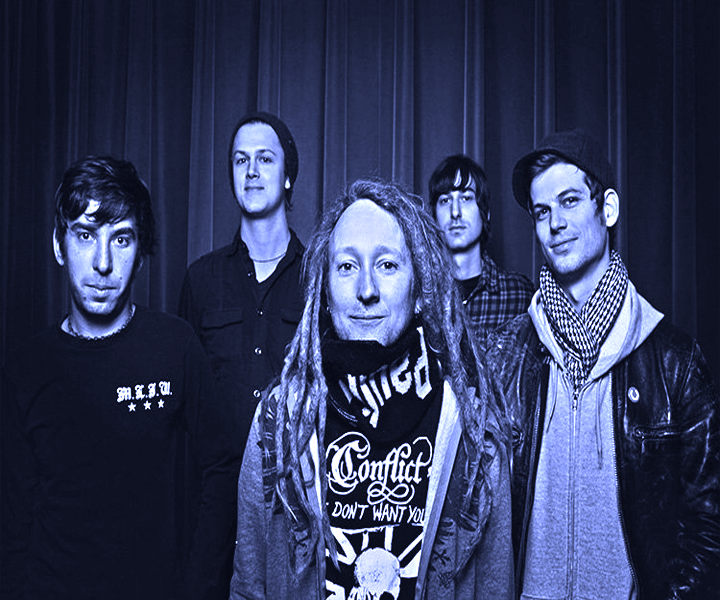 Strike Anywhere is more than a band; Strike Anywhere is a movement, a sound and a force. The band’s incredibly solid career has spanned 15 years across the globe, releasing four critically acclaimed albums while remaining a staple in the underground music scene since their inception. Comprised of Thomas Barnett (vocals), Eric Kane (drums), Matt Smith (guitar), Mark Miller (guitar), and Garth Petrie (bass), Strike Anywhere is undoubtedly one of the most influential melodic hardcore bands of our time.

Formed in 1999 in Richmond, VA, Strike Anywhere has defied categorization and broken down walls of what it is to be punk. After their debut EP, Chorus of One, was released, Strike Anywhere teamed up with Jade Tree who issued Change Is a Sound in August 2001. The release of Exit English followed in 2003 and the rarities collection To Live in Discontent was released in January 2005. Strike Anywhere joined up with Fat Wreck Chords for their next full-length, the critically acclaimed Dead FM, which was released in June 2006 and saw the band touring the around world numerous times in support of the record.

Fast-forward to 2009 and Strike Anywhere had fragments of song ideas, melodies, guitar progressions, rhythms, and lyrics that they’d put together over the course of the three years ready to assemble an album. These ideas were put together while the band was spending time overseas living and working in a rehearsal built by the Prague Nomads, in Czech, outside of the city. There, the band did a lot of crucial writing and fine-tuning of their collection of new songs. Upon their return, Strike got together a few more times in Richmond, VA, in basements and warehouses to finish building what would become Iron Front. Vocalist Thomas Barnett said, it’s interesting that we would have a lot of our writing time for the record done in Europe, because the LP title is a tribute and a homecoming of the Antifascist Circle’s creators and original activists and creators of an international antifascist movement. They were Europeans who were trying to combat the rise of fascism in Central Europe in the early decades of the last century. Strike Anywhere teamed up with Bridge Nine Records for the release of their most emotionally and politically charged album yet, Iron Front, which hit stores in October 2009.

Recorded by Brian McTernan at Salad Days in Baltimore, Iron Front packs the intensity and ferocity that Strike Anywhere had in their heads and hearts throughout the writing process. Barnett went on to say, â€œBrian was adamant that we retain the emotion and the impact of each song’s potential – with soaring and organic anthemic highs and crunching, floor-shaking lows. The production aesthetic was relentless and magnetic and the songs were organized to build a narrative of impressions – the aggressive coupled with the hopeful. None of the cleaner, more translucent, sonic moments that were present on Dead FM seemed relevant to the trajectory of this record. It was the quickest and easiest recording we’ve ever done.

While slightly heavier and noisier than their previous releases, Iron Front features accessible songs that address global and personal issues like human rights, war, politics, and police brutality. Iron Front has more roots more hardcore breakdowns and rhythms, darker melodic textures and fast-paced punk songs that dominate the album. Strike Anywhere has pushed the boundaries of their sound on this album, with soaring choruses coupled with dissonant and angular guitars and percussion. Drums were poured over and guitars were powered up on this recording for a more visceral and physical approach.

With the momentum of recording still on the forefront, Strike Anywhere set out on the road upon leaving the studio in summer of 2009 for a U.S./Canadian jaunt with Propagandhi. That year the band also headlined the first official Bridge Nine Records Tour featuring then-labelmates Polar Bear Club, Crime In Stereo, and Ruiner. Strike then headed overseas for a month-long excursion through Europe.

More recently, Bridge Nine issued a live acoustic album by the band: In Defiance of Empty Times. Spanning their entire catalog, the record pulls from two different sets: a show in Rochester, NY, with labelmates Polar Bear Club, and a gig on the eve of the Occupy Movement in Richmond, VA, which benefitted the Industrial Workers of the World organization. As frontman Thomas Barnett puts it, “This is the riot folk for rioting folks.”