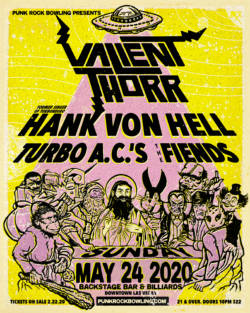 Once upon a time, there was an epic orgy with members of Motorhead, Mastodon, Joan Jett, and a few other RocknRoll legends. 9 months later, Valient Thorr was birthed by Lemmy himself.
HELP. Fack. Shit. ZE Hank Von Hell, former singer of Turbonegro, is making a most glorious first ever PRB performance you do not want to miss!
New York City’s, The Turbo A.C.’s, are the champagne of Surf Guitar Punk. We are stoooked to have this ripping band back!
To kick-off the night, don’t miss a rare performance by The Fiends, featuring members of Long Beach Street Punk legends Clit 45!